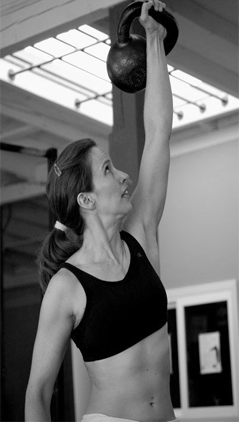 Farrah Lin is a native San Diegan. Growing up, she was not physically active. In fact, she received a C in physical education during high school. She also struggled with emotional eating. When she was 19, she cleaned up her eating habits and began doing step-aerobics. She has been interested in nutrition and exercise ever since.

At 23, she hired a personal trainer at 24 Hour Fitness. He was instrumental in getting her to lift heavy weights, reassuring her that lifting heavy would not bulk her up. He also taught her to focus on large muscle groups.

She heeded his advice and was pleased with the results.

In January 2008, she and her husband started training with kettlebells at IronCore. After a few months, she fell in love with kettlebell training. The results were amazing. She increased muscle mass and lost fat, including the dreaded cellulite.

She feels that her body and mind are much stronger. Her favorite exercises are the Turkish Get-Up and the snatch, even though they did not come easy. She is so passionate about kettlebells that she even takes her kettlebell on vacation.

Farrah taught at IronCore for over one year before she started Hillcrest Kettlebells! 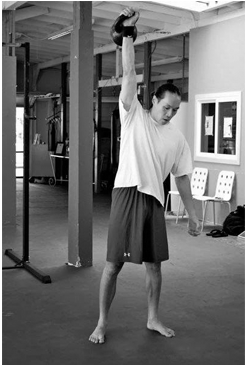 George is not your typical trainer.  Growing up back East, he did not spend any time in the gym, nor did he enjoy physical education at school.  He did play organized baseball, but not for the love of the sport.  He had a “tiger mom”.  Typically, tiger mom’s push their kids to excel at school, musical instruments, sports, social situations, etc, etc.  Luckily, he was the third child of four, so George’s tiger mom was a little less fierce.  He didn’t have to excel, he just had to “be well rounded” and experience a lot of activities.  It wasn’t until he tried skiing that he found a sport he truly loved.  Skiing led to mountain biking, inline skating, snowboarding, and surfing.  With these activities, he never thought to enter a gym.

In January of 2008, the surf was particular bad, and George was getting out of shape.  Because of his various injuries, George decided he needed some “core” work.  In the back of his mind, he remembered a radio commercial he had heard a year before about kettlebells.  It was from the second kettlebell-only gym in the United States named Iron Core.  Iron Core was owned by Sarah Lurie, author of “Kettlebells for Dummies.”  When George originally heard the commercial, he thought kettlebells were just a fad.  It wasn’t until a year later, after that season of bad surf, that he and Farrah decided to give it a try.

George wasn’t a natural at kettlebells, but it was intriguing to him.  The strength, the timing, the speed required to move gracefully and aggressively with a kettlebell contributed to his interest and eventual obsession with kettlebells.  When the surf came back, he was stronger than ever.  As a client, he was content.  It wasn’t until George took a 3-day RKC prep course that the transition to teacher began.  Brett Jones was the original teacher at Iron Core and a Master RKC.  In this prep course, Brett Jones set the tone for how George and Farrah teach.